The purpose of the present study was to explore and explain the success of school management. This study focused on the subscales of successful managers with a view to social constructivism. To achieve this goal, the Structural Theory Method developed by Charmez (2014) was used. The exploratory nature of the research emphasized the perceptions of the participants (successful managers) and the minor experiences that led to their success; therefore, according to Mason (2010) it was assumed that the world of these managers is affected by a set of multiple realities that are themselves affected by the political, social, economic conditions and other beliefs. The main part of this model is the acceptance of the mentality and admitting the researcher's active participation in the construction and interpretation of data in a serious process with the participants and the data (Charmaz, 2014). In other words, the researcher was not an objective and independent observer but part of the reality that was made in the research process. Grounded theory of social structuralism motivates the researcher to search for sources and collect information (Charmaz, 2014). so the researcher made a purposeful choice of homogeneous type for sampling and then made a final choice based on the following inclusion criteria: while studying, the subject should be still in a managerial position; be willing to cooperate and enter the interview; allow the recording and then transcribing the interviews; have more than 5 years of management experience. In this study, in order to collect data, a centralized semi-structured interview was used and the duration of each interview was between 60 to 120 minutes. Charmaz, (2014) the research which focuses on a specific area of practice, requires a smaller sample size. Since the minor experience of successful managers was considered in this study, the small sample size was appropriate. Until the data was saturated, the selection of participants continued for up to 20 interviews. Research. Theoretical sampling was used when the axial code or the resulting class of a set of axial codes were ambiguous and the purpose of theoretical sampling was to purify the emerging classes, to identify their limitations and to improve the meaning and clarify the relationship between classes; the gap between classes was also checked. This helped answer the "why" questions and went beyond answering the "what" questions. For theoretical sampling, two managers were contacted again and a second interview was requested. After the face-to-face meeting, the results extracted from the data were presented to them. Here, the results were clarified and the purpose was not to validate or confirm the analysis, but the researcher sought to expand and strengthen the analysis with the help of the subject views on the field. The second interview lasted 10- 15 minutes. In the data analysis method, the initial coding was as follows: The interviews were studied and coded line by line. During that stage, an attempt was made to produce codes that were shorter, closer to the data and more abstract than the data itself. The second stage was axial coding in which the initial codes in each interview were categorized and then those with high analytical value were identified. By analyzing each interview and advancing in the comparative analysis of some axial codes, a more accurate reflection of what was hidden in the data was provided. While combining multiple layers of meaning and action, the axial codes that had high value in conceptualization received the title of classes.
After analyzing the data and completing the conceptual classes, the researcher conducted a second review of the texts, which enabled to develop her theory based on the available results and theories. In qualitative studies, the researcher has to meet a value criterion that shows evidence of accuracy in data collection and analysis. In this regard, according Lincoln & Cuba (1985) to the data in order to achieve validity, which is one of the value criteria, study's data and interpretations should be grounded in the study events, not the researcher's personal biases. For this purpose, after the final interpretation of the data, the final result of the data analysis was reviewed and approved by the participating managers. Also, a psychologist outside the field of educational management who specialized in the field of qualitative research monitored the entire process of collecting to analyze and write the interpretations and confirmed the accuracy of the research and analysis process. Another criterion that was investigated in terms of value was the potential to transfer the extracted concepts in such a way that external judgment was possible. This work was reviewed and confirmed by drawing final diagrams and approval of three educational management specialists in the university. Finally, the theoretical model became an educational model and its effectiveness was evaluated in an educational study. The results confirmed the effectiveness of this model in reducing depression in the managers selected for this study; thus, according to the mentioned methods, triangulation was performed generally and the value of the research was confirmed. And three categories of findings emerged that included (1) what the managers' small experiences are, (2) how they manage the small experiences, and (3) why the differences in how they manage the small experiences. Based on the results of this study, this underlying theory is effective in integrating what successful managers experience and can be effective in facilitating management for new principals as well as facilitating research contexts for better school management. 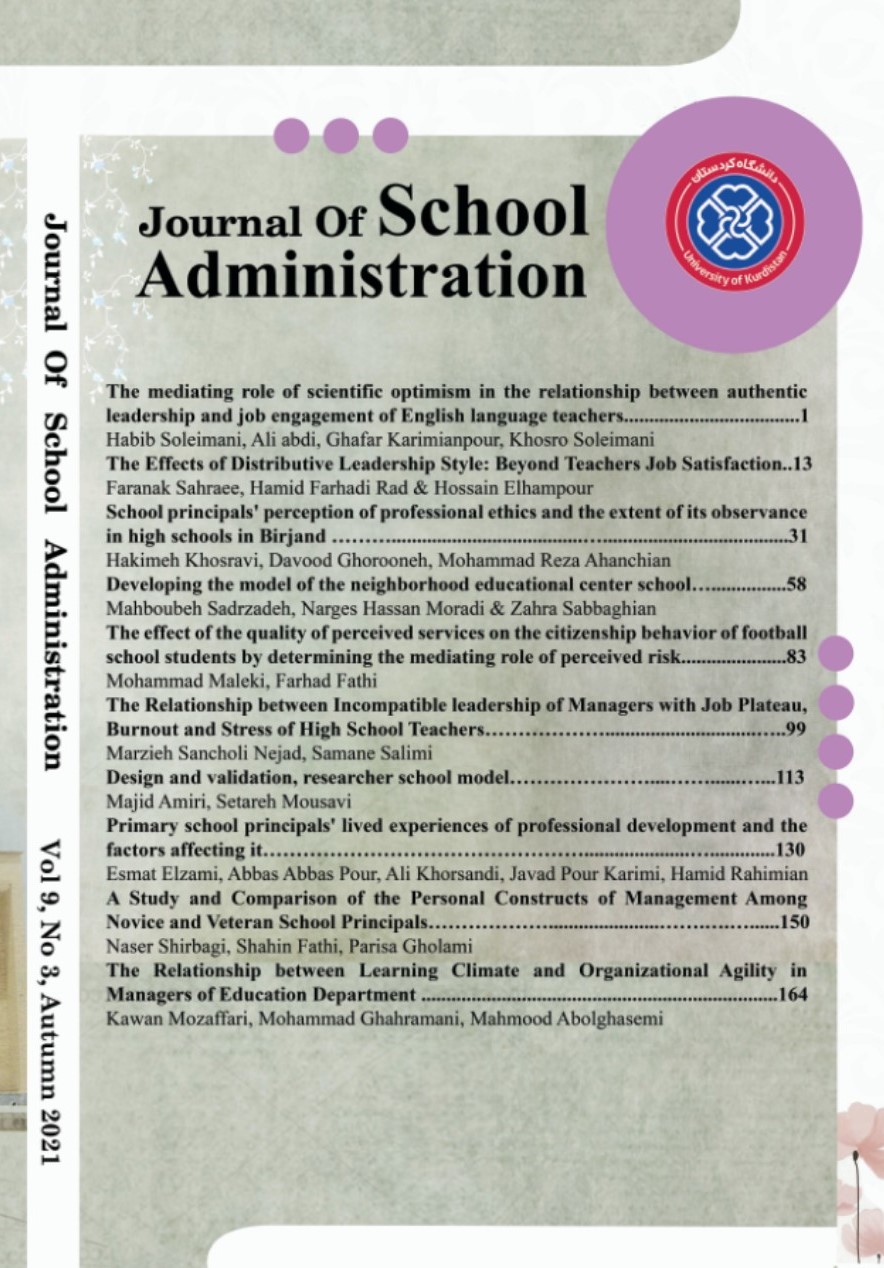